As we grow here at PFS, so does our number of artists in the Co-op. With this growth comes increasing skills and talent, and therefore makes the application process more difficult than it has been in the past, both for the applicant and the folks here making the decisions. While we understand that you are enthusiastic about joining, please understand that not everyone can be accepted into the Co-op at once. However, if you don’t become a member now, we encourage you to apply again in the future and we will be happy to offer our constructive criticism on how we think you can grow into what we are looking for.

We have set some guidelines and offer suggestions to help you determine whether you are ready to apply. If you have any questions or concerns about the process or any of the following, please send an email to dhaney@pfs.org. Thanks and good luck!

Guidelines and suggestions for Co-op Applicants:

If you have read all of the above guidelines and are still ready:

Apply for the Co-op 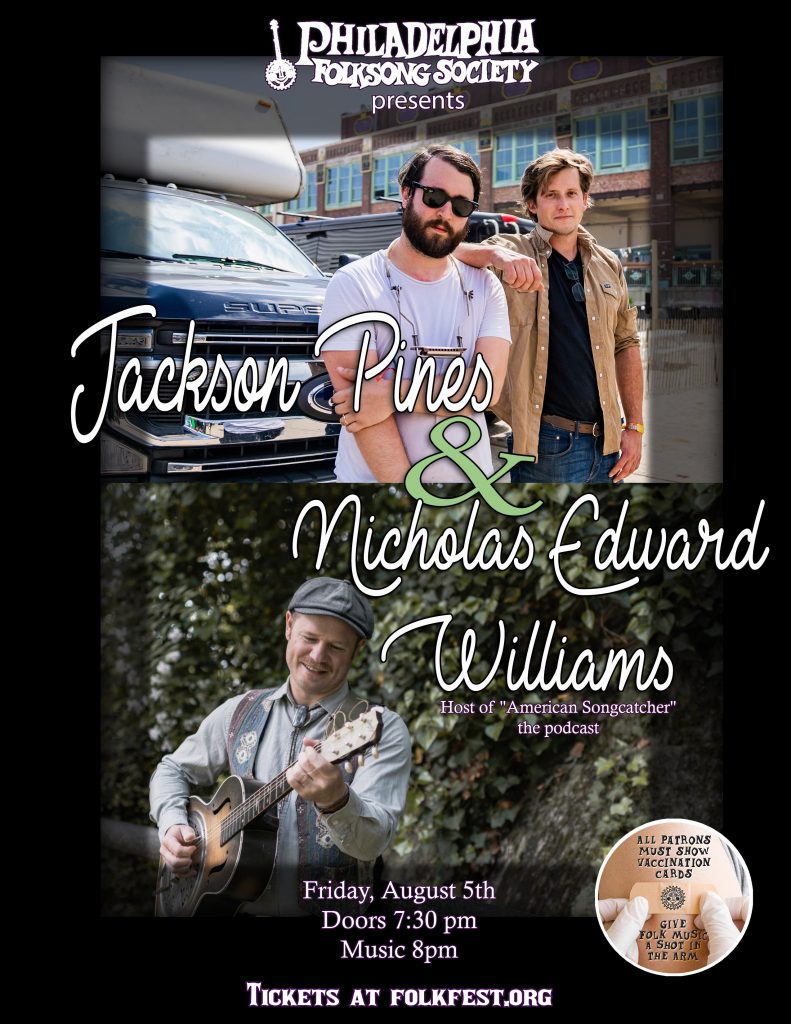 Join us for an intimate evening of music in song rounds as Jackson Pines and Nicholas Edward Williams trade songs back and forth, sharing stories, tradional tunes and original songs. It’s going to be a night not to miss!

Jackson Pines is a band from the Pine Barrens of NJ, that now call Philadelphia home. Consisting of singer-songwriter Joe Makoviecki and stand-up bassist James Black, Jackson Pines harks forward with melodies and rhythms from the past. Combining minimalistic acoustic arrangements and taking cues from the ethos of folk, blues, and indie rock, Jackson Pines tells stories of hard times, overflowing love, disappointment, and hope. In 2017 they released “Purgatory Road” produced by Simone Felice (The Felice Brothers, The Lumineers) and “Lost & Found EP” to critical acclaim. They toured around America from 2016-2019 in a F-150 and have played such varied gigs as small theaters, clubs, festivals, schools, bars, fairs, backyards, and funerals. Their latest full-length album “Close To Home” was released July 2021, and features a full band accompanying Joe and James’ signature rhythms and melodies.

Host of the popular roots music history podcast American Songcatcher, Nicholas Edward Williams is a multi-instrumentalist and storyteller who is dedicated to “playing it forward” by preserving the songs and styles that have shaped our country: ragtime, Piedmont blues, traditional folk, old time and early country. Williams has spent the last 15 years touring around the US, the UK, Western Europe and Australia, blending the roots music spectrum in his own style. He’s opened for Taj Mahal, The Wood Brothers, Dom Flemons, CAAMP, John Paul White, Town Mountain, John Craigie, Rachel Baiman and Lucy Daucus, and has performed at festival stages on three continents. William’s debut record As I Go Ramblin’ Around made the International Folk Radio DJ Charts in 2019 with the #6 Top Album, #7 Top Song. His critically acclaimed sophomore release Folk Songs For Old Times’ Sake unveiled in November of 2021 and has been heralded by the likes of Grammy-winning musician David Holt who said: “With tasteful guitar arrangements and a voice that draws you right in, Nicholas’ recordings roll along like a mountain stream.” 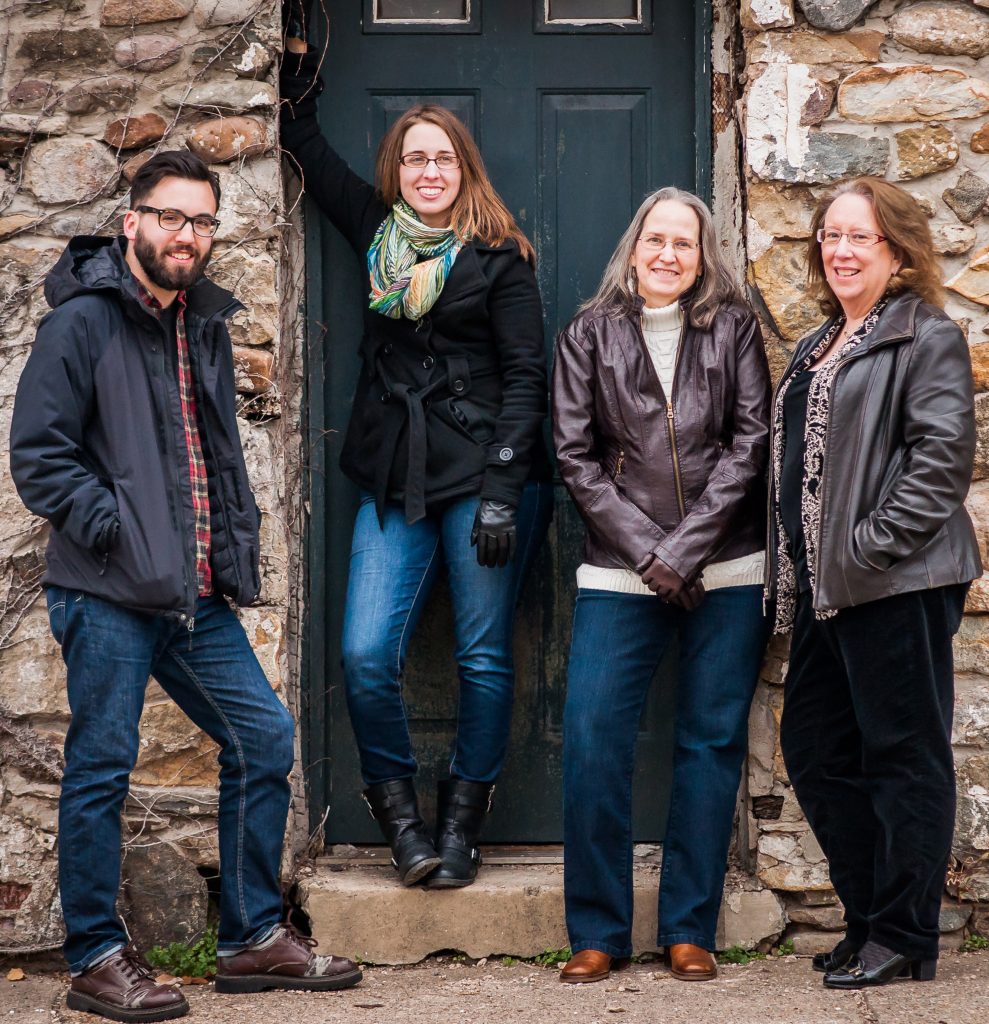 At a very early age, Kevin was playing guitar and banjo and singing harmonies to Irish standards with his father, Irish tenor Tommy McCloskey. In his early twenties, he cut his teeth playing weekly at a Trenton, New Jersey, pub alongside his father and “Irish Billy” Briggs. Kevin developed a passion for songs portraying the plight of working men and women and all the places they toiled. He brings this intensity to the River Drivers.

Mindy was in her early teens when she started singing and playing guitar and dulcimer in coffee houses, pubs, and campus radio stations. While in medical school in West Virginia, she witnessed firsthand the struggles of day-to-day life in Appalachia. The music of the mountains and the miners infused into her repertoire. Years later, she and her daughter Meagan would play music together long into the night and eventually formed the musical duo Port Murray.

Marian’s family roots lie in the town of Ardara in County Donegal–known throughout the world as an epicenter of Irish traditional music. Whenever she can break away, she steals back to the rugged coastline village to recharge at its nightly sessions and the many music festivals held there–including the famed Cup of Tae and Johnny Doherty festivals. She has since brought the River Drivers to Ardara to play at the venues of the Cup of Tae.

Meagan grew up in a house that seemed like it had more musical instruments than practically anything else. She learned how to play the flute and dulcimer when she was quite young and then moved on to other instruments, eventually picking up the fiddle and the tin whistle and falling into Irish music. While helping direct the New Jersey Folk Festival in college, Meagan was introduced to the world of the traditional Irish session by some of the best trad musicians in the Mid-Atlantic. She and the other River Drivers have since taken their high-energy blend of Celtic- Americana to the main stage of the New Jersey Folk Festival and other great international music festivals including the Philadelphia Folk Festival and Musikfest.

The powerful music of the River Drivers can be heard on radio stations in all parts of the US, worldwide in podcasts and radio shows, and onstage at festivals and pubs on both sides of the Atlantic.
Socials: