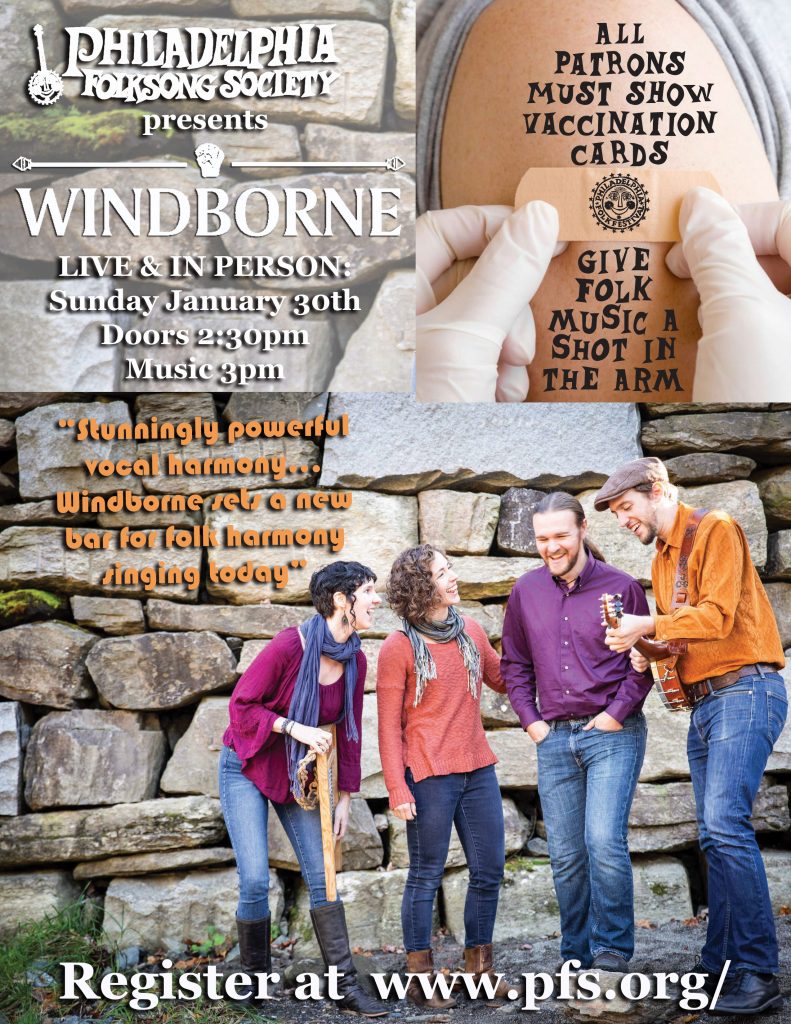 Due to the constantly changing reality surrounding the global health crisis of COVID-19, the FIRST priority of the Society is the health and well-being of our community. After raising hundreds of thousands of dollars for artists through our Digital Concert Venue, we are thrilled to welcome you back to our Roxborough Venue, 6156 Ridge Ave, Philadelphia, PA!

PROOF OF VACCINATION MUST BE SHOWN IN ADVANCE OR AT THE DOOR FOR ALL ATTENDEES, AND MASK WEARING WILL BE STRICTLY ENFORCED AT ALL TIMES.

PFS is excited to re-open the PFS Music Venue! Please join us in welcoming these incredible acts to #KeeptheMusicPlaying

About Windborne:
The four Windborne singers grew up immersed in the traditional song and dance communities of New England and discovered a love of world folk music in their teens. Over the past decade, Windborne has sought out masters of traditional singing styles in the US and around the world to study a variety of vocal music. Through these collaborations, they have developed the vocal agility and authentic sound for which they are known. Their dynamic concert programs include songs from Corsica, the Republic of Georgia, Bulgaria, Quebec, and Basque country, as well as traditional and original American folk music. They believe deeply in the power of music to change hearts.

Windborne Teaching WorkshopIn addition to performing in New England and around the world, Windborne has taught workshops in schools, community centers, singing camps, and universities. Seasoned teachers and song-leaders, they delight groups young and old with enthusiastic, clear, and nuanced instruction for musicians of all levels of experience. Singers not only learn the notes of a song, but also work on the varied vocal styles, language pronunciation, and gain an understanding of the song in its original cultural context.

In 2014, Windborne was one of 10 groups selected by American Music Abroad and the US Department of State to tour as cultural ambassadors through music. They traveled to Turkmenistan, Kyrgyzstan, and Angola, touring with internationally known artists, performing at sold-out national theaters, and collaborating with traditional musicians in each country. They also taught music and dance workshops to schoolchildren, English-language learners, dance schools, choirs, and music conservatories.