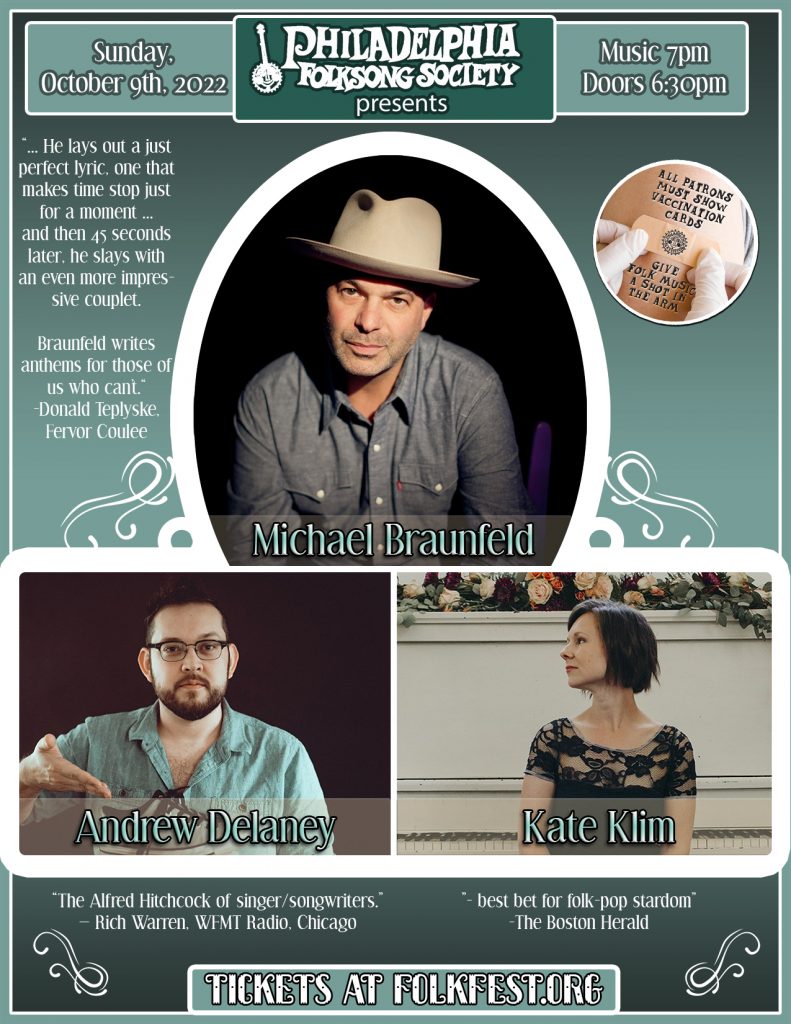 is, first and foremost, a storyteller. His songs capture the everyday triumphs and struggles of ordinary people. His characters – though trapped in the particular circumstances of their own lives – appeal to a universal audience.  Michael was welcomed into the Writers Night Family at The Bluebird Cafe in 2014 and was named a finalist in the Grassy Hill Kerrville New Folk Competition in 2016, 2018 and 2019. From sold out listening rooms to main stages at festivals, whether solo or with his band, the Boneyard Hounds, Michael is delighting old fans and winning over new audiences at every stop.

Recorded at MorningStar Studios outside of Philadelphia, Driver was co-produced by two time GRAMMY® winner Glenn Barratt, and Kyle Swartzwelder. With help from the Boneyard Hounds and some of the best studio musicians in the area, Michael Braunfeld has made the record that he has always wanted to make. From stripped down folk to full-on rock and roll, there is a little bit of everything Michael is known for on the LP. Simply put, there is something for everyone on Driver.

A unique, triple threat artist at the height of his craft, Michael Braunfeld is writing his best songs yet. And onstage, he is a commanding presence. Whether creating compelling everyman characters out of whole cloth, mining his personal history, or addressing topical issues, Michael’s performances combine a powerful guitar style with a seemingly endless supply of urgency. And he has a pretty sneaky sense of humor too.

is an unorthodox singer /songwriter, storyteller, and producer from Arlington, TX. He has spent the last few years touring throughout the U.S. and winning numerous awards and accolades for his writing, as well as having his songs performed and recorded by other artists. Legendary folk DJ Rich Warren once called him “The Alfred Hitchcock of singer/songwriters”. His songs are informed as much by the lyrics-as-literature styles of Tom Waits and James McMurtry as they are by the camp and audacity of The Rocky Horror Picture Show; and are notable for their wit, candor, and often their dark humor. He sells them on the internet for about a dollar.

Delaney has been writing songs since he was eleven years old, when he produced a demo of terrible middle school country tunes. He has made few missteps since then, however, creating a slew of quality albums like Whatever Still Remains (2018), The Escape Artist (2017), and Stricken, Smitten, & Afflicted (2015). His newest album, The Villain is Right! (2021) finds Andrew wandering further afield from his twangy, folky beginnings and embracing electric guitars and sweeping strings.

The Villain is Right! is a co-production by Andrew Delaney and Justin Farren, recorded during Covid-19 quarantine in the summer of 2020. Contributing musicians Emerald Rae, Josh Blue, and Tracy Walton recorded their own parts remotely from their homes in Vermont, Texas, and Connecticut; and then sent them to Farren in Sacramento, CA to be mixed. On The Villain is Right!, Delaney leans into his awkward, nerdy life experience and doesn’t shy away from making jokes in serious moments. The end result is not so much comedic as it is charmingly absurdist.

Andrew has toured extensively all over the U.S., playing listening rooms, festivals, and house concerts where his heavy-to-hilarious storytelling elevates his already engaging catalog of songs. Aside from music, Delaney has dabbled in filmmaking (his music video / short horror film “Howard” was an official selection at the 2017 H.P. Lovecraft Film Festival in Portland, OR) and stand-up comedy.

was five years old when her family inherited a piano, 9 years old when she received her first lesson, and 11 years old when an unsuccessful audition for the film “Life with Mikey” caused her to rethink her planned career as a movie star.

This was fortunate, because the singer/songwriter the Boston Herald has called a “best bet for folk-pop stardom” then turned to music.

With roots in Illinois and Pennsylvania, Kate discovered her parents’ record collection early. She fell in love with iconic songwriters like Carole King, Paul Simon, Billy Joel and Neil Young, but also with her mother’s stack of Motown 45s and classic 80s artists like Cyndi Lauper and Tina Turner. (She will forever have a soft spot for the Bangles, and her first official “cover song” was performed at seven years old – a very passionate rendition of Don Henley’s “Heart of the Matter” delivered after a falling out with her then 6-year-old sister.) While Kate had been tinkering with melodies since she was a toddler, as she grew up they evolved into full-fledged songs and by college she found herself majoring in songwriting at Boston’s acclaimed Berklee College of Music. It was here that Kate worked on her skills as a writer and performer, and became involved with the music community known for producing icons like Bob Dylan, Tracy Chapman, Patty Griffin, and many more. Within a few years of her debut as a singer/songwriter, she was opening for artists like Shawn Colvin, Lucy Kaplansky, and Richard Shindell and a regular on stages like Club Passim and Nashville’s Bluebird Cafe.

Kate has been recognized by some of the country’s premier songwriting contests. She won the 2010 Kerrville New Folk competition, was selected as an Emerging Artist by the Falcon Ridge Folk Festival. She has also been a finalist in the Mountain Stage Newsong Contest (as Kate puts it, “if you need to lose a song contest to someone, you could do worse than Ingrid Michaelson”), the Mid-Atlantic Song Contest, and Telluride Troubadour Competition, among others.

Her first release “Up and Down and Up Again” was created with the help of renowned producer Crit Harmon (Martin Sexton, Susan Werner, Lori McKenna), and was dubbed a “gem” by Performing Songwriter Magazine. Crit’s experience with Lori McKenna led him to suggest Nashville, TN as a place for Kate to explore – she ended up moving there permanently in 2009. Her second release, “Kamikaze Love,” was produced by friend and bandmate Brian Packer. A good marriage of her folk and pop sensibilities, its songs were featured in several TV shows, including the pinnacle of high-brow, intellectual social commentary: “Keeping Up With the Kardashians.” Her third studio album, 100 Million Years, was released in the late summer of 2014 – an album Kate described as having “a little more maturity and a little more quirk.

After a hiatus of several years surrounding the birth of her two sons, Kate returned to the studio in early spring 2020 with new experiences to share and new songs to sing. While the initial recording session wrapped in early March of 2020, the final sessions were postponed as the first wave of Covid shutdowns hit. The album, which chronicled change and growth through the lens of her ending marriage, was completed at home while she finalized divorce proceedings with her then-husband under the same roof.

The result is her 2022 release “Something Green.” Despite the album’s roots, she is quick to point out that they aren’t songs about loss. “It’s an album about hope, love, change, and new growth.” Kate looks forward to return to live shows in support of the album, which she views as her strongest release yet. While the subject matter and recording experience were far from what she envisioned, what came of it was something positive and something healing. The lyrics from the title track seem fitting: “Sometimes you burn it down, so the rest don’t go. Sometimes you burn it down… so something new can grow.”