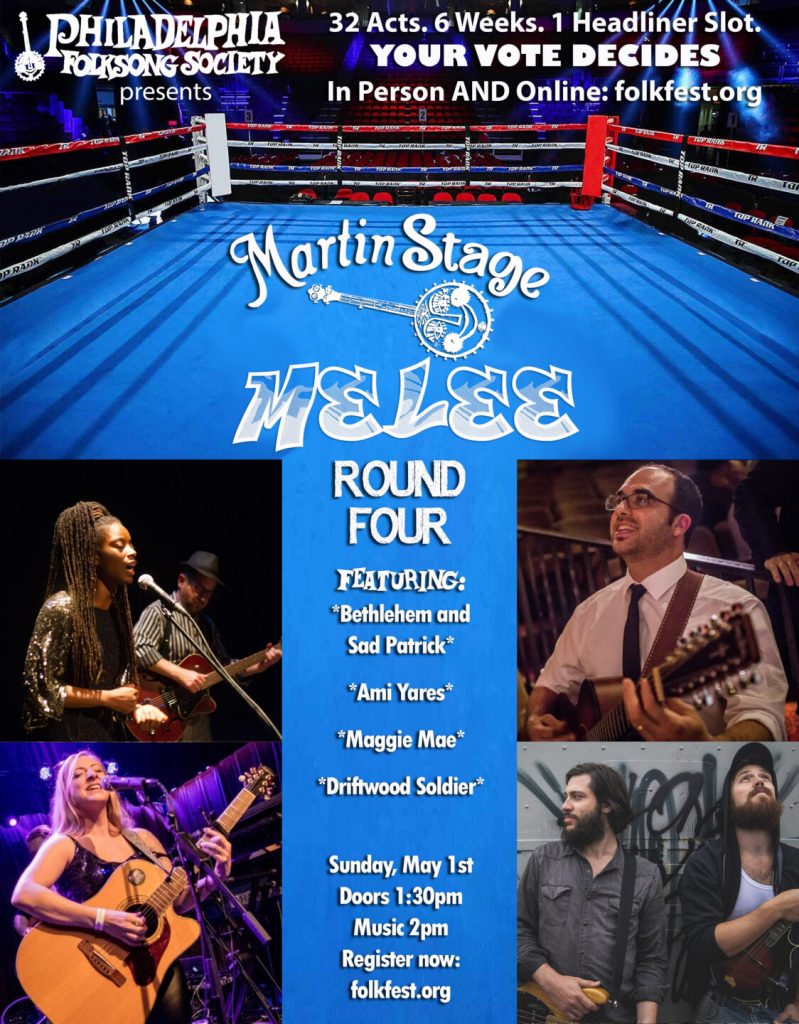 Due to the constantly changing reality surrounding the global health crisis of COVID-19, the FIRST priority of the Society is the health and well-being of our community. After raising hundreds of thousands of dollars for artists through our Digital Concert Venue, we are thrilled to welcome you back to our Roxborough Venue, 6156 Ridge Ave, Philadelphia, PA!

PROOF OF VACCINATION MUST BE SHOWN IN ADVANCE OR AT THE DOOR FOR ALL ATTENDEES, AND MASK WEARING WILL BE STRICTLY ENFORCED AT ALL TIMES.

The Martin Stage Melee is a contest to find YOUR favorite artist in the Philadelphia region. 32 acts will compete in 8 sets of 4 to advance to a final round where one act will receive a coveted headlining slot on the Martin Guitar stage at the 60th Annual Philadelphia Folk Festival August 18-22, 2022. Attendees in person and virtually via the livestream will be able to vote for their favorite to win! Support your favorite act or take a chance on a night of incredible new-to-you artists.

Tickets are available IN PERSON at the PFS Venue or streaming Online here at folkfest.org

All persons entering the Philadelphia Folksong Society at 6156 Ridge Ave. Philadelphia, PA 19128 must provide proof of vaccination or negative PCR test within 72 hours and wear a face mask per Philadelphia mandate starting April 18th. If the person does not have an appropriate face mask, per CDC guidelines no vented masks or gaiters, PFS will provide one. Inability to adhere to these protocols will lead to a warning then a removal without refund. PFS’ COVID protocols will be reviewed at each board meeting as the pandemic continues.
About the Artists:
Ami Yares
Ami Yares is the offspring of the Jersey suburbs, raised in the echo of the Liberty Bell, only to find his voice on the shores of the Mediterranean. “Yares wields his 12-string guitar as if it were an entire orchestra, backing his vocals with a dense, rich cascade of sound ” (David Foster, AXS). Influenced by the spectrum of American roots music, Ami’s music merges his Jersey upbringing with wisps of Middle Eastern culture. Yares has performed across the world and US. He released his first solo album Begin to Begin Again in 2018 and works on his sophomore release.
Bethlehem and Sad Patrick

Bethlehem and Sad Patrick perform songs of love and other struggles. Combining her soaring vocals and driving percussion with his sparse guitar, they deliver powerful songs about being in and out of love, keeping your head up in the city, struggling to make your way, and seeking peace on the margins. Sad Patrick’s hybrid of folk, blues and jazz playing supports Bethlehem’s “vocussion” – her powerful singing, remarkable improvisations and nuanced melodies riding atop her tarima stomps and body percussion. Their live shows are enthralling, with their on-the-spot interplay and how fully Bethlehem inhabits their songs and captivates a crowd.
Driftwood Soldier
Driftwood Soldier plays gutter-folk music, a proprietary blend of bittersweet ballads, crooked stories, and thumping blue rants on mandolin, bass guitar, and assorted junk foot-percussion described by Bruce Warren of WXPN as “a bluesy version of Nick Cave with a nod to Tom Waits.”
Their second album, Stay Ahead of the Wolf, was produced with Erin McKeown, mixed by Grammy winner Ted Hutt and released in 2019 to kind words from the likes of Billboard, Glide and Americana Highways. Delivered live with a grin, a growl, and a hint of brimstone, don’t miss the chance to hear this beast howl!
Maggie Mae
Maggie Mae is a soulful singer-songwriter based in Philadelphia who fronts an exciting and energetic Folk/Funk group under the same name. She has been described as “poppy, polished, talented, & promising,” by XPN’s The Key’s John Vettese and has become a fixture in the Philadelphia music scene.
Maggie Mae has shared bills with local and national acts including Soulive, The Heavy Pets, Dawg Yawp, Emily Drinker, the Ladles, and more at many of Philly & New Jersey’s premiere music venues. The band has been hard at work in the studio after completing a successful fundraising campaign for their debut album.