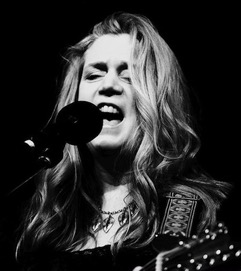 POSTPONED: PFS is rescheduling the April 4th performance of Marion Halliday and Roger Street Friedman to the weekend of June 26th. We will update the event with an exact date as soon as it’s decided.

Marion Halliday, a native Kentuckian now living in Philadelphia PA, is proud purveyor of her own special blend of bluegrass and bourbon-infused, original, women-powered, Americana. While she has been a professional singer for many years, Marion only began focusing on her songwriting in 2016. She released her debut solo album Rings Around Saturn on July 1, 2019 and in its first month, both the album and Marion (as artist) were ranked #3 on the US/International Folk DJ charts (data compiled by Folk Alliance International); Marion was also #3 artist that month and had two songs in the top 10.

Marion has great breadth as a songwriter. She has found inspiration, for example, in the history of her new home-town, writing a range of songs that touch on Philly’s rich and varied past. This includes songs about an escaped convict from Eastern State Pen, the forlorn beauty of Laurel Hill Cemetery, the statue to the Lenape in Wissahickon Park, and the revolutionary war memorial at Washington Square, among others. Through her “Philly Songs Project,” Marion is available for special programs in schools and organizations around Philly that might wish to have her share with audiences interesting and historical tales through the medium of her beautiful, Philly-oriented original music.

Marion has also written songs on more universal, contemporary topics such as domestic abuse, gun violence, suicide, and the scourge of heroin and meth addiction ravaging our country. Lastly, Marion’s music also includes amusing reflections on the challenges of relationships, as well as an abiding love of bourbon.

CLICK HERE TO WATCH A VIDEO OF MARION HALLIDAY

CLICK HERE TO LISTEN TO MARION HALLIDAY ON SPOTIFY

Roger Street Friedman is an award winning singer-songwriter based in Sea Cliff, NY. His critically acclaimed 2017 album Shoot The Moon reached #2 on the Roots Music Report Americana Country Album Chart. The album recalls the singer-songwriter tradition of Marc Cohn, Randy Newman, Warren Zevon, Mark Knopfler and Robbie Robertson. Roger’s song “Sun Never Sets” is being used in human rights curriculum in universities and high schools in the Northeast. Roger’s live shows are infused with emotion and will make you laugh and maybe even shed a happy tear. He’s a frequent performer on the music festival circuit and actively tours with his band. Roger’s third full-length album, Rise, produced by the Grammy-winning Larry Campbell (known for his work with Bob Dylan, Levon Helm, David Bromberg, Hot Tuna and more) will be out this spring.

CLICK HERE TO WATCH A VIDEO OF ROGER STREET FRIEDMAN

CLICK HERE TO LISTEN TO ROGER STREET FRIEDMAN ON SPOTIFY