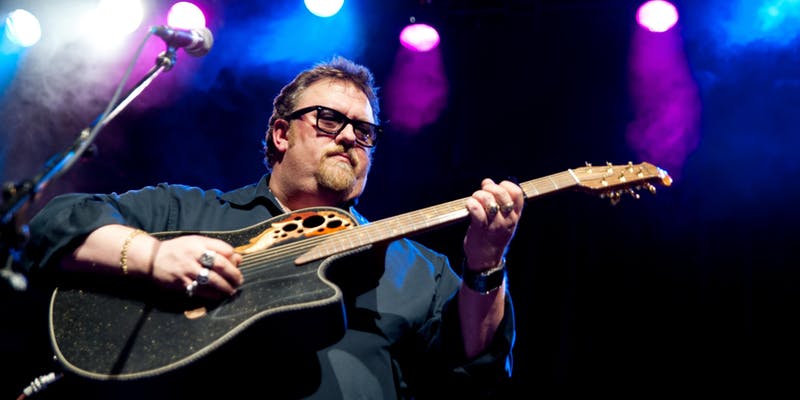 POSTPONED: PFS is rescheduling the September 11th performance of JP Cormier. We will update the event with an exact date as soon as it’s decided. Thank you so much for your patience and understanding during this difficult time.

Nobody really knows who J.P. Cormier is for sure. That’s to be expected, believe me.

In 1974 he was a five year old boy, discovering an innate talent for playing the guitar, I had a little hand in that, guiding him through the beginning stages. He learned faster than I could teach.

By the mid eighties, not out of his teens, he was a sideman for bands and artists of many different genres in Alabama, Tennessee, Mississippi, and all across the deep south. As he traveled and worked he added more and more instruments to his arsenal of capabilities. He became indispensable to the bands he worked for.

In the early Nineties, he became a sideman for one of Canada’s favourite sons, Stompin’ Tom Connors and also became a staple of the recordings at Studio H in Halifax. His work with the CBC there spanned musical, production, and arranging duties.

In the mid nineties he reentered the musical scene of his beloved East Coast and the Island called Cape Breton. He exploded onto the trad music scene there as a fiddler, performing some of the most difficult music ever produced by legends like Winston Fitzgerald and Angus Chisholm with a facility that stunned onlookers. Especially those who knew he wasn’t born there, but born in Ontario to Cape Breton parents. Somehow, some way, his music was the real thing, sounding like he had been steeped continually in a handed-down brew of family tradition from the old country.

Nothing could be further from the truth.

His previous gig was in Nashville playing mandolin and banjo in a grammy nominated bluegrass gospel band and performing on the Opry, and playing television shows with the likes of Waylon Jennings. All those people also thought he was one of them, American, reared in the ways of bluegrass, old time and Americana music. They knew he was from Canada, but it just didn’t seem possible.

Then in 1997, something amazing happened.

An album released in Canada, out of nowhere, called Another Morning. This time it was him as a songwriter and a lead singer.

And what a songwriter he turned out to be. Some of the performances on that album are literally part of the musical vocabulary today in the East Coast. Songs like the title cut, and Kelly’s Mountain, The Molly May (co written with his cousin Gervais) and others. It inspired, 25 years ago, some of the biggest names in the business today. People like Dave Gunning, Matt Andersen, David Myles, Joel Plaskett, all of which will tell you: that record changed things.

The Canadian industry thought so too, and it received a juno nomination and won an ECMA.

And that was just the beginning.

36 years later after stepping on stage as professional union musician for the first time at the tender age of 13, JP is still going, and frighteningly, still getting better.

16 albums followed the success of Another Morning, winning 12 more ECMA’s, another Juno nomination, a Canadian Folk Music Award and 5 Music Nova Scotia Awards. Each album was a snapshot of each thing that he can do. There are fiddle albums, Mandolin, Banjo, Guitar, tribute records, songwriting collections, a purely astounding spectrum of talent and musical vision.

His catalogue of recordings and the 150 or so records he’s produced on other artists, resemble the tapestry he weaves in live performance. Where he used to carry 3 and 4 piece bands, he tours alone now.

Just him and the instruments.

People still leave his shows confused, amazed and wondering what they just saw. Did they see a storyteller? A Songwriter? Arguably one of the best guitar players in the business today? Someone who crosses the lines between different instruments like there are no lines? Who was that masked man, anyway?

Accolades aside, and there are many from people like Chet Atkins, Marty Stuart, Waylon Jennings, Gordon Lightfoot; JP sees himself as just a performer. He’s shy, but has a razor sharp wit and lightning sense of humour. He can be reserved or edgy to the point no return. He speaks for soldiers, first responders, other artists, the forgotten and lost. He speaks sometimes only for himself and refuses rebuttal.

Of all the things he is, foremost he is an entertainer. I think one of the best. After you’ve seen what he does, I’m certain you will too.

CLICK HERE TO WATCH A VIDEO OF JP CORMIER

CLICK HERE TO LISTEN TO JP CORMIER ON SPOTIFY