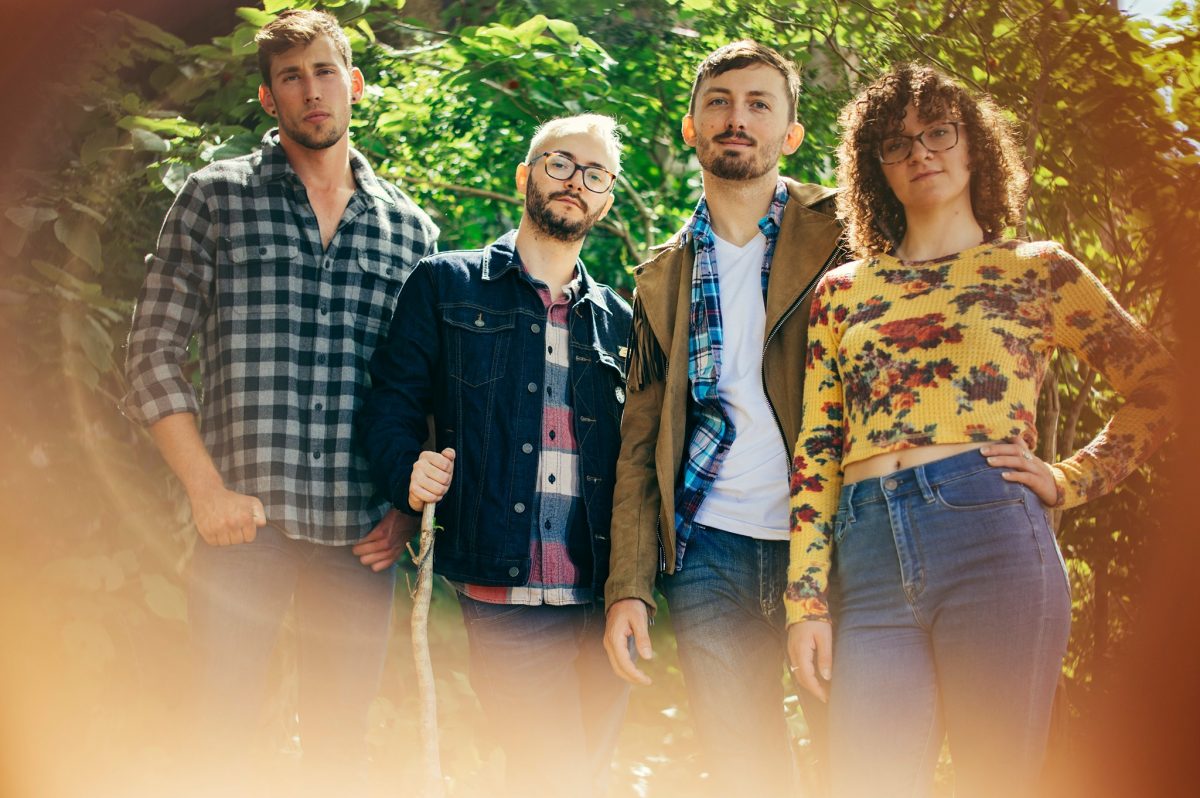 POSTPONED: PFS is rescheduling the June 5th performance of Earth Radio, Apache Trails, & Rare Spirits. We will update the event with an exact date as soon as it’s decided. Thank you so much for your patience and understanding during this difficult time.

FEST FAVORITES FROM THE 2018 PHILADELPHIA FOLK FESTIVAL BRING THEIR NEW EP TO THE PFS VENUE!

Earth Radio is a high-energy, USDA certified organic, grass-fed, cage-free Philadelphia based folk-rock band. Blending together the unique spirits of two folk singers (Jani Duerr & Joanna Osborne), a funky bassist (Jay Jolly), and a jazz-inspired drummer (Dan Lord), their music uplifts the heart, awakens the spirit, and makes the body move. ​The dynamic duo of Joanna and Jani’s vocals balances out in each note, giving the audience a stunning blend of voices in countermelody and harmony. Best of all, the band brings a genuine joy to every moment on stage, resulting in an electric live performance that will pull you out of your seat and put a smile on your face!

CLICK HERE TO LISTEN TO EARTH RADIO ON SPOTIFY

They’re a band that promises nothing less than a rowdy, unbridled, and altogether good time that’ll leave the soles of your feet singing a tune of their own. Featuring a thunderous double-bass slapping alongside, soulful lead guitar, a freight-train rhythm, and a howling lead vocal. This musical arrangement might best be described as a rootsy amalgam of folk, country, blues and whiskey.

​Apache Trails are Jason Webb(vox/guitar), Matthew Messatzzia (bass), and Jeremy Worthington(drums), backed with accompaniment from a phenomenal cast of rotating artists on instruments including but not limited to guitar, mandolin, banjo, piano, and fiddle.

The group began in summer of 2014 when singer-songwriter, Jason Webb brought 3 original songs to the attentive ears of friend and fellow musician Matthew Messatzzia. Together they adopted the name Apache Trails after the famous rocky road leading through Arizona’s mysterious Superstition Mountains, steeped in history and drenched myth, the name presented an instant muse for Webb’s writing as reflected in songs like “Superstitions, Rumors, Notions” and “Hope at the Well” off of the band’s 2015 Ep recorded and engineered at Baby Snake Studios by Peter Scobell. The 6 track EP presents a collection of songs that helped to comfortably seat the group within the Americana genre.

​The self-titled album in addition to being the group’s debut also provided the perfect opportunity for a much larger musical effort featuring collaboration with guests from over 12 other local Delaware and Pennsylvania bands including Michael Davis of The Bullets, Devin Zito of The Hold-Up, Gordon Lippincott of Mad-Sweet Pangs, and James Dukenfield of New Sweden lending their talents on guitar, Emma Sue Webb and The Splashing Pearls on backing vocals, David Berry of The Sin City Band on piano, and Clinton Hoffman drums.

Now in their 3rd year, what had started as 3 songs has since grown into hours worth of original material. Apache Trails has been featured on local radio receiving airplay on Philadelphia’s 88.5 WXPN and performed live in-studio for shows like 93.7 WSTW’s Hometown Heroes. They have had the wonderful opportunity to perform at a variety of venues and festivals throughout the east coast including the long running Philadelphia Folk Festival( PA), Musikfest (PA), Rockwood Music Hall (NY), The Avalon Theater (MD), The Queen Theater(DE), Boot and Saddle (PA), and World Café Live (PA).

Frequent faces various stages at the Philadelphia Folk Festival, Rare Spirits serve up high-proof Roots music with verve, humor and aplomb. Sweet harmonies, rollicking rhythms, and an electrifying stage presence combine to sing songs of drinking, cheating, lying, stealing, shucking, jiving, killing, dying…and the occasional haunting. The band features Molly Hebert-Wilson on upright bass, Robare Pruyn on banjo and guitar, Noam Berg on mandolin and guitar, and Alex Bell on drums and percussion, each bringing their own special ingredient to the cocktail. They perform original songs, old time music with a twist, and a special set that tells the history of Prohibition through song and story, from the Whiskey Rebellion all the way up to repeal in ’33. Pour yourself a double shot, and come see where booze, bluegrass, old time, and rock n’ roll meet on the other side.

CLICK HERE TO WATCH A VIDEO OF RARE SPIRITS

CLICK HERE TO LISTEN TO RARE SPIRITS ON BANDCAMP