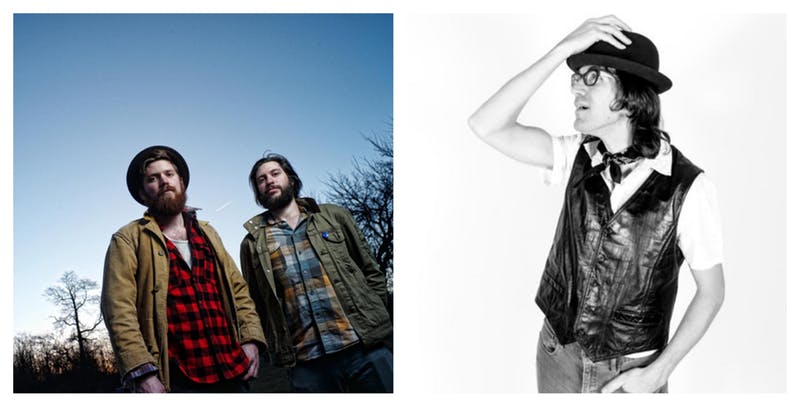 Bassist Bobby Szafranski first lent his velvet touch to the back-handed poetry and full-throated ruckus of mandolinero Owen Lyman-Schmidt’s solo work in 2013. Since then the duo has been leapfrogging their way up and down the East coast bringing their unlikely sound to bars, living rooms, roof tops, and back alleys.

Scavenger’s Joy, Driftwood Soldier’s 2015 debut, established their musical range for audiences everywhere, with two-thirds of the songs receiving radio play on dozens of radio stations around the country including WFUV, WNCW, and WXPN, where Bruce Warren called the duo “a bluesy version of Nick Cave with a nod to Tom Waits.”

In early 2017, they followed the breadth of Scavenger’s Joy with the focused intensity of Blessings & Blasphemy, a concept EP exploring the tension between spirituality and dogma by reinterpreting gospel traditionals alongside anti-religious originals.

With this bellowing, crooning testimony to the power of storytelling in hand, Driftwood Soldier is back out on the road bringing their liver-shaking live show to audiences both devoted and unfamiliar. This isn’t some nostalgic reproduction of an imagined past, or a feel-good celebration of a rosy future. It’s a bittersweet love song to an imperfect world, a lullaby that leaves you bleeding. Find Driftwood Soldier, wherever they’re playing, and hear this new beast howl!

Greg Klyma is a road-tested troubadour and relentless songwriter out to make the world a better place one song at a time. In 2019, he has released 3 new albums on his Bandcamp page while maintaining an active touring schedule. For over 20 years, he’s been weaving lanes between Tom Petty and Merle Haggard on music’s highway, keeping the American folk tradition alive with his enduring themes, articulate and amusing stories, and populist ideals. He rolls in off the road, pulls out a guitar, and proceeds to take us back to the basics: family, love, gratitude, and laughter.

CLICK HERE TO WATCH A VIDEO OF DRIFTWOOD SOLDIER

CLICK HERE TO LISTEN TO DRIFTWOOD SOLDIER ON SPOTIFY

CLICK HERE TO WATCH A VIDEO OF GREG KLYMA

CLICK HERE TO LISTEN TO GREG KLYMA ON SPOTIFY