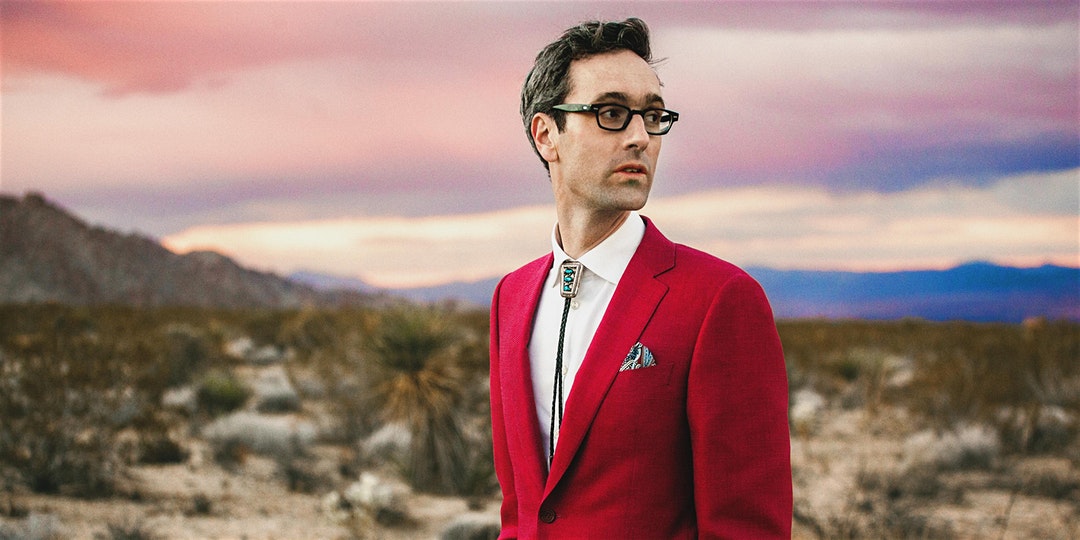 POSTPONED: PFS is rescheduling the May 16th performance of David Myles. We will update the event with an exact date as soon as it’s decided. Thank you so much for your patience and understanding during this difficult time.

“Nattily dressed in a suit and tie, wearing his trademark specs, he looks like Buddy Holly transposed to an after-hours supper club. But Myles’s music conveys a populist appeal that leaves no one lacking.” – No Depression

The role of the song and dance man is a noble calling. But restricting himself to only a couple creative pursuits would just not be enough for David Myles. Sure, the Maritime music maker’s song and dance mastery keeps getting more and more impressive—2017’s award-winning, vintage rock ‘n’ roll hip-swiveler Real Love and the spectacular, lush Francophone pop of 2018’s Le grand départ stand testament to that—but Myles is compelled to sally forth toward new challenges and accomplishments. This past year he released Santa Never Brings Me a Banjo, a children’s book based on his beloved modern holiday classic, and dove back into the world of public radio, broadcasting his smooth baritone over Alberta’s CKUA airwaves on his new show Myles From Home. Not to mention he does it all while adhering to an unrelenting tour schedule that has seen him and comrades Kyle Cunjak (bass) and Alan Jeffries (guitar) grace stages ‘round the world.

One could argue that this astounding rate of production was in the cards for Myles all along. The New Brunswick-born songwriter grew up in Fredericton surrounded by musicians. It was through family that he was exposed to classical music and musical theatre—which might explain why he’s such a natural on stage, under the bright lights—and thanks to them that he found himself working through the intricacies of trumpet with Canada’s Royal Conservatory. Eventually, he found himself grooving and crooning to the classic sounds of legends like Elvis, Roy Orbison, Willie Nelson, and Johnny Cash. But it wasn’t until he found himself studying Chinese in Hangzhou, China, writing songs on a $30 plywood guitar, that he realized he had to make a radical change in direction. Instead of heading to law school, he decided on a life dedicated to music, and symbolized his devotion to the craft by promising his father, Jim Myles, that he’d wear a suit and tie every single day he went to work. The elder Myles, a former science teacher who directed musicals, and passed away in 2017, left an indelible mark on his son, informing the heavy, poetic spirit of Le grand départ. And David continues to don well-tailored suits on every stage he sets foot on.

His work ethic, too, has paid dividends. Since making that promise, David has gone on to release a dozen records in just over a decade, building a catalogue that spans numerous genres, has spawned countless musical friendships, and helped soundtrack the lives of music fans all over the globe. Real Love’s retro rock and country and Le grand départ’s adventurous chansons are just the most recent sonic territory he’s explored. You can find unabashed, bouncy pop on Here Now; delicate, romantic folk tunes and old-school rhythm and blues on So Far; and classic crooning and swingin’ arrangements on In The Nighttime. He’s dusted off the sleigh bells and put his vibrant stamp on yuletide classics—as well as penning a few new original ones—for It’s Christmas, which continues to delight December audiences every year. And he’s partly responsible, along with fellow east coaster Classified, for Canada’s best-selling rap single of all-time, the deliriously catchy, JUNO Award-winning “Inner Ninja.”

If there’s a musician on earth who can keep up this wild pace and keep growing as an artist, it’s the incomparable David Myles. One need only get themselves down to the theatre or auditorium or club that he’s headlining in their town—singing his big heart out, dancing his slick shoes ragged, and relishing every moment of it—to confirm that. There’s no other kinda life for this song and dance (and radio and writing and everything else) man. “I don’t care if it kills me,” Myles sings on fan favourite “When It Comes My Turn,” over a life-affirming swell of pedal steel. “I’m gonna do what it takes to keep some warmth in my heart and a smile on my face.”

CLICK HERE TO WATCH A VIDEO OF DAVID MYLES

CLICK HERE TO LISTEN TO DAVID MYLES ON SPOTIFY