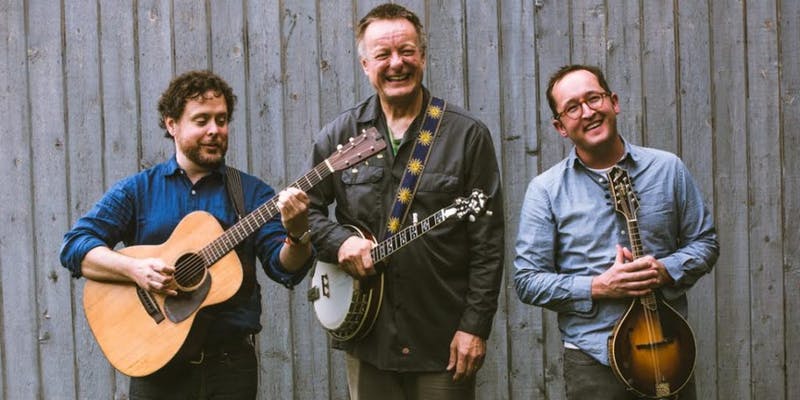 In the world of bluegrass and folk, where the collaborative possibilities are endless, what draws some musicians together in formal collaborations is hard to pinpoint. For Joe K. Walsh, Grant Gordy, and Danny Barnes, a newly formed bi-coastal trio, curiosity is the rule, and tunes are just a starting point. “We approach every tune with an open attitude everyday. There’s a sort of tacit undiscussed flexibility that we all honor when we play together”, explains Walsh. For three musicians who have vibrant solo careers, as well as multifaceted musical collaborations under their belts, the trio has sparked a new level of creative inspiration, a venue to push and pull, learning and speaking with one another through improvisation. “We are in some ways three very different musical pieces, but the thing that unites us is a deep respect and affinity for anybody who is improvising,” says Walsh. The trio is anchored by banjo player and singer/songwriter Danny Barnes. Barnes is best known as the frontman of the Bad Livers, for his collaborations with Dave Matthews and Bill Frisell, and as the 2015 winner of the Steve Martin Prize for Excellence in Banjo and Bluegrass. He is an innovative banjo player and songwriter originally from Texas whose solo album “Pizza Boz”, garnered him a sort of cult following, and led Sam Bush to describe him as “The Great American Un-Sung Hero”. The elder of the group, Barnes brings an element of fierce individuality to the trio, with wisdom-infused vocals and straightforward, no nonsense banjo picking.

Gordy and Walsh come from a more jazz and swing influenced background, having first bonded over their mutual obsession with learning David Grisman solos. For Walsh, hearing some of the early Dawg records was his first impetus to learn the mandolin. However, he is now equally renowned for his bluegrass and old-time sensibilities. Growing up in Illinois and later Minnesota, Walsh first established himself on the East Coast as the co-founder of progressive bluegrass band Joy Kills Sorrow, and as a long time member of The Gibson Brothers. He went on to become a faculty member at The Berklee College of Music, and launch a solo career with his albums Sweet Loam and Borderland.

Gordy, who is originally from Colorado and now lives in Brooklyn, went from being a fan of David Grisman, to playing in his band. Having spent six years in the David Grisman Quintet, Gordy released a self titled solo album in 2010 to critical acclaim, and has been featured on NPR’s Morning Edition, Tiny Desk Concerts, and All Things Considered, as well as The Fretboard Journal, Acoustic Guitar Magazine, and Flatpicking Guitar Magazine. Darol Anger, with whom Gordy has collaborated frequently, describes his playing as containing “Kaleidoscopic excellence, startling emotion, and personal revelation”.

The three friends first crossed paths at a music camp in Grand Targhee, Wyoming, where they were each employed separately to teach and perform. But rather than sitting down to play together, they first bonded during a game of disc golf, which became a venue for philosophical musing and discussion. A desire for intellectual growth and challenge became a theme for the three, and their tours often involve car discussions on everything from French Literature to meditation. Perhaps because of this, their music feels like an infinitely extending plane. “When we play, everybody is leading with their ears, and everything is possible, it’s hugely omnivorous”, says Walsh.