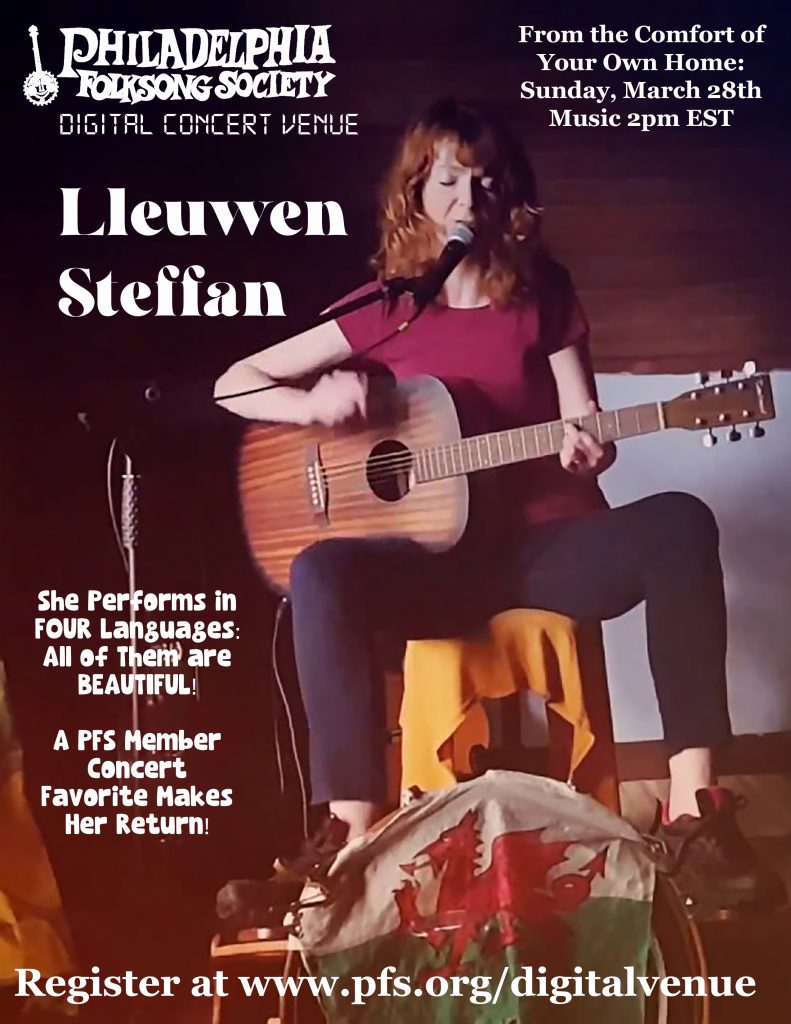 PFS Presents Lleuwen Steffan – Postponed-We will update with a new date as soon as possible.

A Philadelphia Folksong Society Member Concert FAVORITE who has not been to the US in years gives you a front row seat from the comfort of your own home! With her tours cancelled and tens of thousands of dollars lost, this is the time to support the musicians we love and #KeepTheMusicPlaying

About Lleuwen Steffan
This may be a sound you’ve never heard. It’s Celtic music . . . but not as you know it.

A PFS Member Concert Favorite Returns! Watching Lleuwen perform is a unique experience. Originally from Wales but has also lived in Brittany, her songs are written in the Celtic languages of her homelands – Welsh and Breton. Her most recent album was awarded Album of the Year in FR3 television awards, France in 2012. She also won Liet International songwriting competition in Gijon in the same year.

Lleuwen is a singer, songwriter and guitarist from the Ogwen Valley in Wales. In 2005 she released Duw A Wyr / God Only Knows, a collection of contemporary interpretations of old Welsh hymns. This collaboration with composer Huw Warren and saxophonist Mark Lockheart was described by critic Stuart Nicholson as ‘The most unusual, strangely beautiful album that you’re likely to hear.’

Her 2007 debut solo album Penmon (named after her Anglesey home) saw Lleuwen take her music in a more personal direction. Staying true to her roots by focusing the album around the ebb and flow of the Welsh landscape, Lleuwen established herself as a solo artist in her own right and her album was met by great reviews internationally. Interested in Celtic connections through music, Lleuwen performed with Breton singer Nolwenn Korbell at the Lorient Interceltic Festival in 2008. Following that performance, Lleuwen was awarded a Creative Wales Award by Arts Council Wales that enabled her to continue her work with Breton musicians and record Tân, her most successful album to date.

“A voice of archetypal Welsh beauty—simultaneously heavenly and earthy – a true soul whammy.” -Chris May

http://www.lleuwen.com/
DUE TO THE SUCCESS OF PFS’ FIRST LIVESTREAM, THE METHOD THAT WE CAN SUCCESSFULLY USE FOR THIS EVENT IS STREAMING LIVE IN A PRIVATE FACEBOOK GROUP. YOU MUST HAVE FACEBOOK ACCESS TO PARTAKE IN THIS LIVESTREAM. YOU WILL BE SENT THE ADDRESS TO JOIN THE GROUP IN THE CONFIRMATION AND WE WILL ONLY APPROVE YOU IF YOUR FACEBOOK NAME MATCHES WHAT YOU SUBMITTED ON THE FORM, SO BE CAREFUL WHEN FILLING IT OUT PLEASE. WE APOLOGIZE FOR ANY INCONVENIENCE THAT THIS MAY CAUSE.