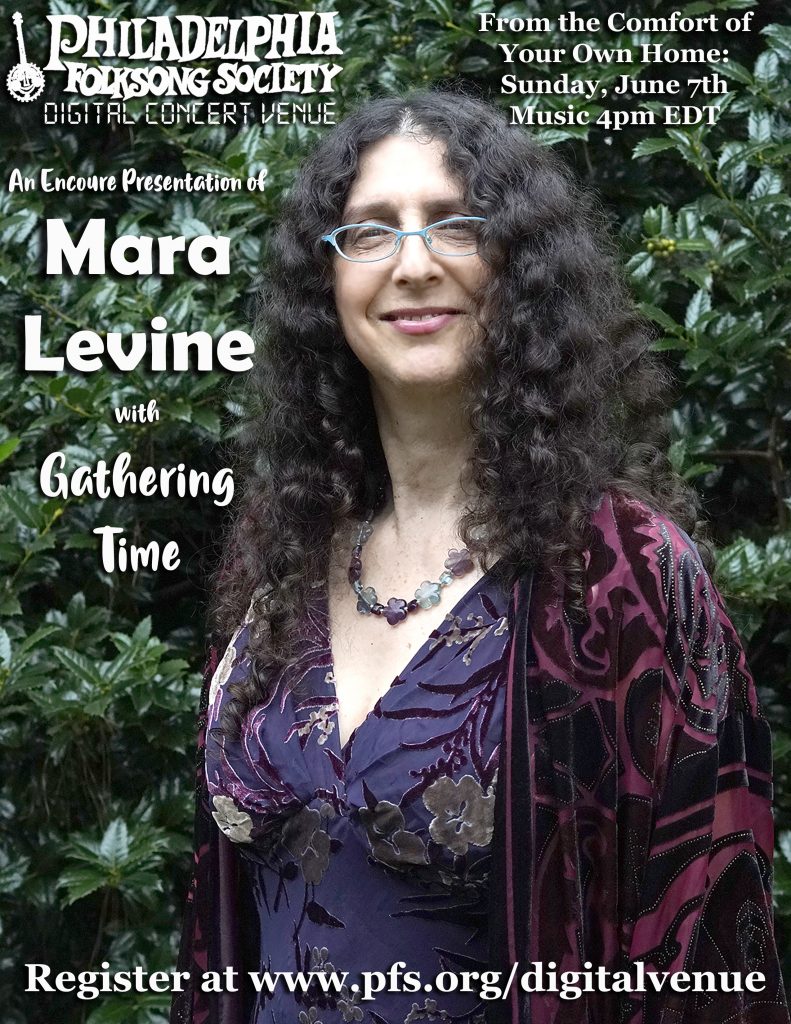 PFS is excited to bring you an encore presentation of Mara Levine’s acclaimed CD release concert with Gathering Time recorded live in the PFS venue in 2019! Whether you were there and want to relive the musical magic, or get to experience it for the first time, we are thrilled to offer a new way to enjoy music in the PFS Digital Concert Venue and #KeepTheMusicPlaying

PLEASE NOTE: This is NOT a Livestream, but an encore stream of Mara’s 2019 CD release concert recorded live in the PFS venue. As such, when you register and are sent a link to the concert group, please note that you will not be admitted until June 7th 15 minutes before the start of the show.

About Mara Levine
Called one of the best singers of her generation by Christine Lavin, and “Golden Voiced” by David Amram, international touring artist Mara Levine is known as an exceptional song-finder, selecting and then creating beautiful interpretations of fine traditional and contemporary songs. Her new CD FACETS OF FOLK, was the #1 album, with the #1 song and #1 artist positions on the International Folk DJ Chart for January 2019. On FACETS OF FOLK, Levine presents a number of songs of social conscience with themes of taking a stand, making a difference and considering the treatment of others. Those tunes, written by popular contemporary songwriters as well as emerging talents, are all carefully set among folk favorites and lesser known songs.

Levine’s second CD, Jewels and Harmony, received stellar reviews and was the #1 album, with the #1 song and #1 artist positions on the International Folk DJ Chart for January 2013, placed #3 overall for 2013, and was named #4 Cover Album of 2013 by Cover Lay Down. She was selected for a Juried showcase at the 2014 NERFA conference, and a Folk DJ Showcase prior to that, and she tours nationally, often sharing shows with the trio Gathering Time, who appear on 5 of the songs on FACETS OF FOLK. They toured Germany and Ireland together in 2018. Mara also performs in duos with Caroline Cutroneo and Terry Kitchen. She has appeared on numerous radio programs and performed at various venues and festivals throughout the country.

“With Facets of Folk, Mara Levine solidifies her position as a folk force to be reckoned with. As on her previous CDJewels and Harmony, her signature sound shines through: Thoughtful song choice, creative harmonies, rich instrumentation, her own exuberant singing. With an emphasis on songs that make a difference, Mara has created music that is very much for today, but also for years to come.” – Si Kahn