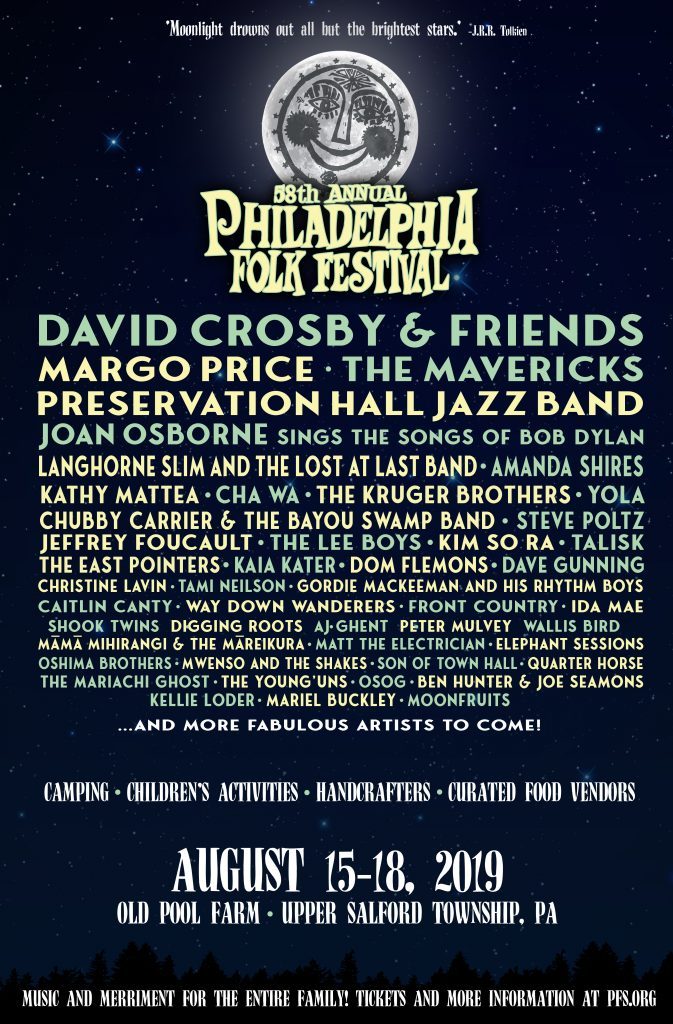 Headlining this year’s event is two-time Rock and Roll Hall of Famer and co-founder of The Byrds and Crosby, Stills & Nash, David Crosby & Friends, who will be performing for the first time at the Philadelphia Folk Festival, along with Nashville based country singer-songwriter Margo Price; eclectic American band, The Mavericks, who combine Tex-Mex, neotraditional country music, Latin, and rockabilly, and are celebrating their 30th anniversary; New Orleans based Preservation Hall Jazz Band, who have held the torch of New Orleans music aloft for more than 50 years; American singer, songwriter, and interpreter of music, Joan Osborne Sing the Songs of Bob Dylan; and violin playing, singer and songwriter Amanda Shires, will all perform on the festival’s Martin stage. Additionally, these incredible artists will also be performing at the festival:

The Mariachi Ghost – The Shook Twins – The Young’uns –  Wallis Bird – Way Down Wanderers YOLA … and many more to be announced.

The fan favorite Thursday Night Camper’s Only show hosted by WXPN’s David Dye of World Café will welcome AJ Ghent, Elephant Sessions, and Ida Mae. This concert will set the tone for the entire weekend.

With a focus on the family and inclusion, Philadelphia Folk Festival presents an extravaganza of traditional and contemporary music, dance, juried crafts, food vendors, camping, and children’s activities hosted at the Old Pool Farm in Upper Salford Township. The beloved summer festival presents eight stages, more than 80 artists (with more to be announced), requires nearly 2,500 volunteers and welcomes 35,000 attendees over three days and four nights. With genres ranging from alternative folk, Americana, and traditional to Celtic, blues, indie, bluegrass, old time, Zydeco, Indigenous, Klezmer, as well as family-oriented musicians and activities, there is truly something for everyone. The Philadelphia Folk Festival offers a wonderful weekend of musical discovery.

The Philadelphia Folk Festival continues to be a leader and innovator in its field.  Under the new artistic leadership of Lisa Schwartz, PFF was the first US based festival to sign the KeyChange agreement, and to make their goal of presenting a 50:50 gender balance in the first year, 2018. Says Lisa, “We were determined to move decidedly toward balance and equity, and curate with a focus on more women artists, and more world music and international performers. The best part is this has happened organically and we will again be presenting a wonderfully balanced and diverse lineup.”

PFF2019 passes and tickets are on sale NOW, Early Bird discounts are on while supplies last! Visit www.pfs.org or call the office at 800-566-FOLK. To view the variety of ticketing options, including weekend passes and camping / RV passes, please go here https://58thphillyfolkfest.eventbrite.com

Founded in 1957, The non-profit Philadelphia Folksong Society offers programs of presentation, participation, and education throughout Greater Philadelphia and the nation year round and contributes to the preservation of a vast variety of musical styles and historical perspectives. PFS has acquired international recognition and local acclaim through popular programs such as the Philadelphia Folk Festival, the longest continuously running outdoor music Festival in North America. The 58th Annual Philadelphia Folk Festival occurs August 15-18, 2019. Follow PFS on facebook, twitter and instagram at @FolkSongSociety

The support of our members is the driving force behind the programs and events that have preserved the past, promoted the present, and secured the future of folk music throughout the Greater Philadelphia region for over 60 years! In addition to our concerts, SINGs, workshops, and festivals, PFS also provides education, school programs, artist development and service to our community. Your PFS membership allows you to enjoy tons of benefits while helping PFS to expand our programs and reach our community in ways that may not otherwise be possible. Join –> https://pfs.org/membership/